Mohamed Nasheed’s aspiration of a democratic rule in the Maldives Islands may soon realize its looming potential, as nearly 20 months subsequent to ensuing violence and protest, elections will be held to name the next president. As Jon Shenk’s documentary The Island President portrays, the first democratically elected president and a devout spokesman for the islands, Nasheed embodies a grave passion for the survival of the Maldives. Although his first attempt at pure democracy resulted in his February 2012 expulsion from authority, as those in protest executed a coup against his presidency, The Island President is confident that the people of his native lands will vote him back into sovereignty. However, opposition to this prospective is illuminated by the campaigning of several competing candidates, including Mohamed Waheed Hassan Manik, the man who replaced Nasheed after the forced relief of his command. 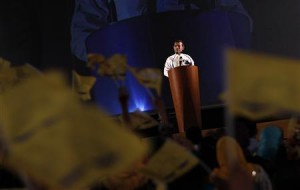 Nasheed, an overwhelming and international advocate for climate change, has proven a history of vivid rhetoric and action regarding the potential for the 1200 Maldive Islands to be utterly submerged by the rising sea level, making them not only dangerous, but uninhabitable. Yet, now, as his country dives into the implementation of soundly democratic procedure, it is unclear if The Island President will emerge dry in elected authority or dripping in leveraged defeat, allaying his once political stance.